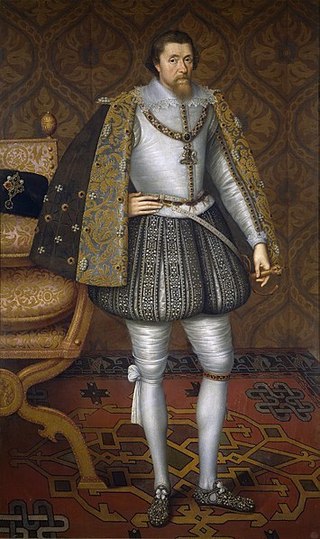 According to Winston Churchill's History of the English-Speaking Peoples, James I came to England from Scotland "with a closed mind, and a weakness for lecturing," his pet subjects including the evils of witchcraft and tobacco, and abstract political theory. Having been raised under strict, Spartan discipline, with no frills or luxuries, his accession to the throne gave him the idea that he was rich.

Sort of; he had Parliament to deal with, because they had a different opinion, having taken it into their collective heads that His Majesty did not rule as an absolute monarch, chosen by God. How dare they--but they controlled the pursestrings.

The king's behavior appalled them. "James was much addicted to favourites," Churchill writes, "and his attention to handsome young men resulted in a noticeable loss of respect for the monarchy." One of them, Robert Carr, received an earldom in Somerset and "was implicated in a murder by poison. . . ."

Indeed. If you want an account of that rather astonishing sequence of events, I suggest you look no further than The Poison Bed, which I review on my other blog, Novelhistorian.