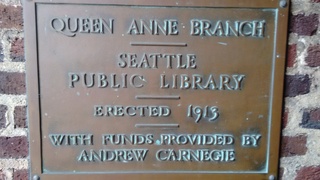 Carnegie's philanthropic reach extended very far, as this plaque in my local library entryway suggests, thousands of miles from his mines and mills. Whether that largesse cancels out his sins as industrialist and employer is another matter. (Author photo)

Andrew Carnegie's business genius centered mostly around a mania for correct accounting. How startling it is to read today that when he began to dominate the steel industry in the 1880s, nobody else had ever thought of calculating the expense of production. Company books were examined at year end, and only then would a manufacturer know what profits and losses amounted to, or where expenditures had gone. By contrast, Carnegie became famous — or infamous — by fighting to save pennies on the ton, constantly requiring detailed audits, figuring that the profits would take care of themselves. He was right.

Carnegie was careful to cultivate his image as a philanthropist, but it has to be said, he followed through. "The man who dies rich, dies disgraced," he was known to remark. As such, he endowed libraries, schools, hospitals, and, later, the famous concert hall and the Carnegie Endowment for International Peace, among other worthy causes.

Nevertheless, he also earned that money by cutting his employees' wages —25 percent, in the case of the workers at his Homestead Steel plant in 1892, sparking one of the bloodiest strikes in American history. Around that time, four-fifths of the country's families earned $500 a year or less, and more than one hundred Americans had incomes of $1 million or more, prompting William Dean Howells to decide that our nation was becoming a plutocracy. The question is worth asking again today.

Recently, I reviewed a novel with a fascinating premise, that Carnegie became a philanthropist partly because of a thwarted love. Interesting, no?